January Series-Peter Wehner ; HOW CHRISTIANITY CAN BE A HEALING FORCE IN AMERICAN SOCIETY

2023 SPEAKERS - JANUARY SERIES The January Series is a FREE 15-day award-winning lecture series that takes place each year at Calvin University and is televised live at the Hastings Public Library.

The series aims to cultivate deep thought and conversations about important issues of the day, to inspire cultural renewal and make us better global citizens. CU is thankful to share this special gift with local, regional, and global community, thanks to our underwriters. While the series is televised live from 12:30-1:30, watchers can continue to watch all speakers until midnight EST, after midnight only certain speakers will allow their program to be viewed. Catch prior years programs through the Calvin University website or DVD's available in the Library Collection.

Peter Wehner ; HOW CHRISTIANITY CAN BE A HEALING FORCE IN AMERICAN SOCIETY
Tuesday, January 24 ; Peter Wehner is an in-residence Senior Fellow, a contributing opinion writer for The New York Times, and a contributing editor for The Atlantic. He has written for numerous other publications—including Time, Wall Street Journal, The Washington Post, Financial Times, The Weekly Standard, National Review, Commentary, National Affairs, and Christianity Today. He has also appeared frequently as a commentator on MSNBC, CNN, Fox News, CBS, PBS, and C-SPAN television. 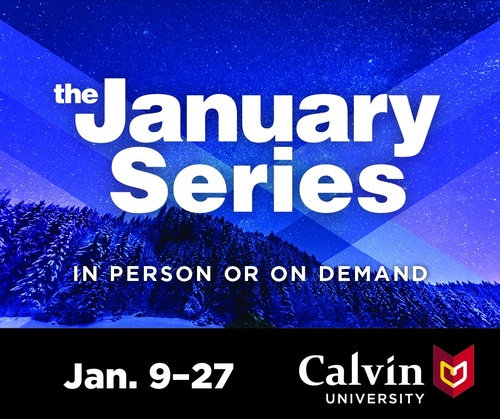